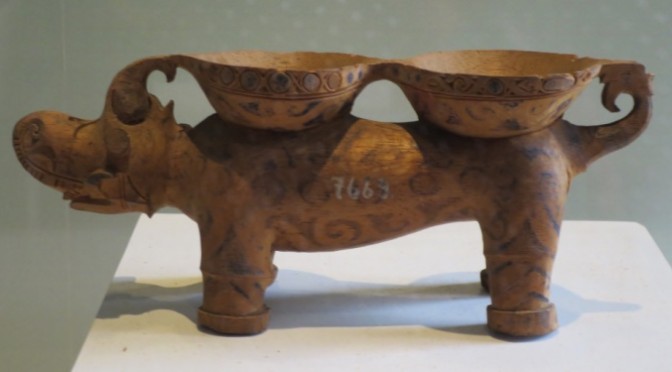 Within a month of our Museum visit we’d be living in Central Kalimantan for six months and later travelling further afield on the island of Borneo. We were very interested in viewing objects and learning about Dayak culture.

The thematically organised displays were quite informative. For example, a small display on Dayak tattooing included photographs and information on the tattooing process, tattoo stamps and tattoo ink containers. The containers were beautifully crafted in stylised shapes of Dayak motifs – the hornbill and tiger. The featured Tattoo ink container (Wadah tinta tato) in the shape of a stylised tiger is a symbol of the Dayak God of healing [Inv.7769]

Hornbills are an important symbol throughout Kalimantan and this wooden carving symbolises the upper world of the Gods. In West Kalimantan  Kenyalang are placed on top of a pole close to the longhouse.  In times past the Dayak ‘elders’ had a way of limiting access and therefore protecting rainforest trees. Only a warrior who had killed an enemy was permitted to fell a tree to make a hornbill statue. In times of war, the hornbill spirit is invited to fly into enemy longhouses to weaken them. There were a number of jewellery and objects from Kalimantan worn or used in important ceremonies. Worn by women this Hisang (earring) is decorated with aso dragon motif. This necklace (kalung) made from human teeth, sea shells, wood fibre, beads & wire, West Kalimantan is worn as an amulet. A rattan bag with beads (manik-manik) was made in Sampit, Central Kalimantan. It turned out that Sampit is only about three hours from where we are now living.

Rituals associated with burial are some of the most significant traditional ceremonies in Kalimantan. This Miniatur Peti Mati (coffin) was the only funeral object on display.